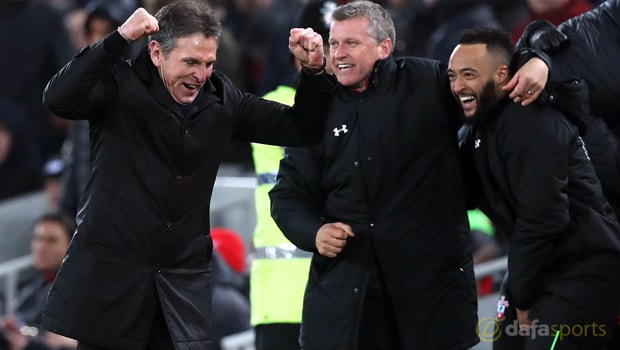 Southampton manager Claude Puel has urged his side to take full advantage of their place in the EFL Cup final as he looks to ensure they have European football next season.

The south coast club booked their spot at Wembley on Wednesday night with a 1-0 victory over Liverpool at Anfield.

Southampton, who are priced at 2.88 to win the EFL Cup, have yet to concede in the competition and defeated the Reds 2-0 on aggregate over the course of two legs to reach their first major final since 2003.

The Saints had just 27 per cent possession against Liverpool but a strong defensive performance ensured that Liverpool were unable to get on the scoresheet.

Puel came in for criticism earlier in the season after Southampton suffered an early exit from the Europa League.

However, the Frenchman believes his squad are starting to adapt to his style and feels they can use this season’s experiences to improve their performances in Europe next term.

Puel said: “It’s important to put this experience for next year in European games. It’ll be important to qualify.

“It will be important for the squad to continue the work, to improve, and know the possibilities to play European games.”

The St Mary’s outfit are likely to face Manchester United in the final on February 26 as the Red Devils currently hold a 2-0 lead over Hull heading into the second leg of their semi-final clash on Thursday.

Puel insists his men will travel to the national stadium fully motivated to win the EFL Cup, which would be their first major piece of silverware since 1976.

He added: “Now we go to Wembley, not just to participate but to win this cup.”