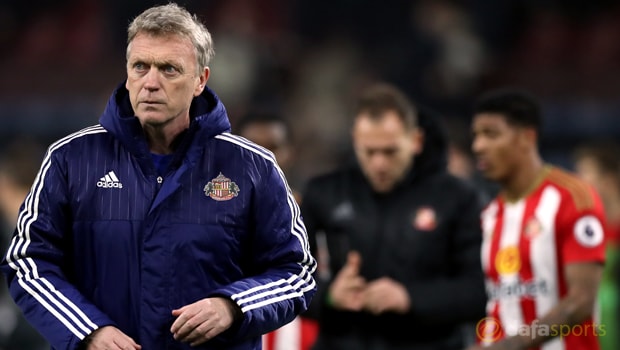 David Moyes says the spirit his Sunderland players showed in Tuesday’s 0-0 draw with Tottenham is exactly what they need to survive.

The Black Cats, who are 1.17 to be relegated, welcomed Mauricio Pochettino’s title-chasing side to the Stadium of Light for what looked like it could be a long evening but, despite being second best for much of the game, battled it out for a well-deserved point.

However, they remain entrenched in the relegation places and are now five points adrift of 17th place Swansea.

They also suffered a major blow on Monday with Patrick van Aanholt being sold to rivals Crystal Palace and the limited funds available to Moyes meant he again had to wheel and deal in the transfer market.

The Scot admits that the lack of quality in his squad means that togetherness and unity will be the key to their survival hopes, starting on Saturday against Crystal Palace.

A Sunderland win at Crystal Palace is 5.00, while the draw is 3.80 and former boss Sam Allardyce’s men the 1.62 favourites.

Moyes believes Tuesday’s result can act as a springboard for his side, admitting the type of spirit and commitment they showed is exactly what will be required to survive.

“What I need to do is to build on the great team spirit we have here,” he said.

“We need to have a toughness and make as many tackles as we did against Spurs in the rest of our games.

“We need to be rugged, at times a bit ugly if we have to. We have to maintain this against the better teams at home.”