Antonio Conte happy to put January window behind him 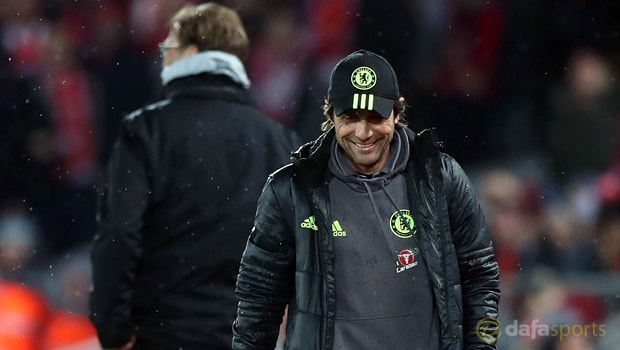 Antonio Conte admits he is pleased to see the back of the transfer window as it will help his Chelsea side concentrate on their Premier League title bid.

The Blues battled to a 1-1 draw at Liverpool on Tuesday and could have had all three points had Diego Costa not seen his second-half penalty saved by Simon Mignolet.

Despite that disappointment, Conte’s side currently sit nine points clear at the top of the table and could land a major blow in their bid to top the standings when they host third place Arsenal on Saturday.

Tuesday’s game at Anfield also coincided with the close of the transfer market and, although Branislav Ivanovic may still leave for Zenit St Petersburg, the club largely chose to limit their business.

Conte, whose side are the 1.30 favourites to top the standings at the end of the campaign, admits he is glad to see the distraction of the January window pass and is hopeful the Blues will now kick on in their bid for the Premier League title.

“We have the same players that we play with at the start of the season, we haven’t changed and I am very happy,” he said.

“The transfer window has closed and now we can keep them in this second part of the season. I am happy to work with my players.

“Our market is finished – not buying or selling and I am pleased because now we have a squad and it is important to be focused and concentrated for the second part of the season because this is the part to win the title or a place in the Champions League.”