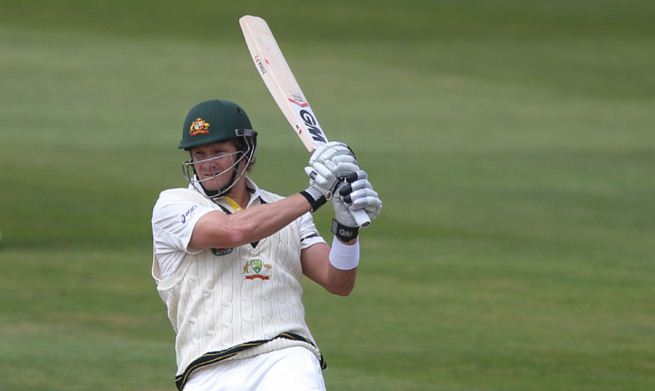 Australian opener Shane Watson says he is back after smashing a powerful century on day one of their final warm-up against Worcestershire.

Watson was often deployed further down the order under former coach Mickey Arthur, who favoured an opening partnership of Ed Cowan and David Warner, but new coach Darren Lehmann has put the 32-year-old back in his favoured position.

Lehmann has already announced that Watson and Chris Rodgers will open the batting in the first Test against England and they looked in great shape at New Road.

The duo put on a stand of 170 in a performance that is sure to give the Australians confidence ahead of the Ashes.

Watson impressed when hitting 109 off 111 balls, which included 14 fours and two sixes, while Rodgers played the supporting role with a steady 75.

It was Watson’s first century in three years and Lehmann may have pulled off a masterstroke by moving him back to the top of the order.

“I feel my game is more suited to opening the batting, it’s something I feel well-equipped to handle now,” he said.

“It certainly brings out the best in my personality, it’s what I enjoy. I always know the ball will do something, whether it’s swing or seam. It gets my blood going and gets my mind switched on immediately.

“That combination really does bring the best out in me as a batsman.

Hopefully I can do it for a longer period of time.”

Watson also paid tribute to 35-year-old Rodgers and believes their opening partnership could be a great success for the Australians during the Ashes, which starts at Trent Bridge on July 10.

“It’s been great to be able to bat with Chris, he’s certainly a very experienced and knowledgable cricketer,” he added.

“He kept me going and was able to sum up conditions. He gave me a few really good pointers out there, especially early on with him understanding English conditions even better than I do.

“It was nice to be able to get a good partnership going the first time we’ve had a chance to bat together.”