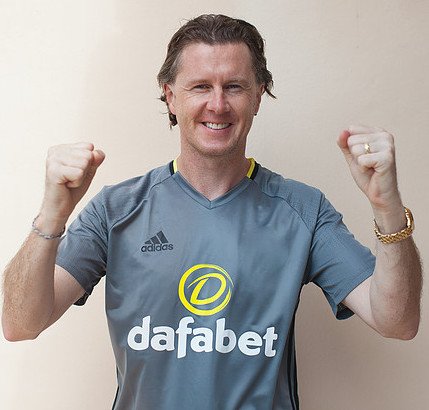 As seen on Dafabet’s twitter account, there was this tweet “Macca’s Treble: Chelsea, Everton and Man Utd to all win. For his score predictions visit dafabet.com 18+” with the photo of a guy in gray shirt with Dafabet’s logo on it.

It’s now official. Dafabet is delighted to introduce Steve “Macca” McManaman as the latest brand ambassador who will be bringing in his insights, expert analysis and commentaries throughout the season of English Premiere League.

Regarded as one of the most successful among English Footballers, Steve McManaman flexibly played as winger, midfielder and playmaker for three big teams Liverpool, Real Madrid and Manchester City. The former football superstar was known for his speed and ball dribbling skills.

Undoubtedly, for 9 years he spent on his first team Liverpool he won League Cup and FA Cup. Then after a remarkable 364 appearances and 66 goals, he decided to move to Real Madrid in 1999 where he played for La Liga Club.

During his stay in Real Madrid, he won several awards such as 2 Supercopa de España, 1 UEFA Super Cup and 1 Intercontinental Cup. Through his achievements, he was cited by UEFA as one of the successful amongst all English exports in the modern era. Apart from English Football Leagues, he also played for England in the 1998 FIFA World Cup.

In 2003, he moved to Manchester City before he decided to retire in 2005. However, it didn’t end with his retirement as he embarked a new career in television and is presently with BT Sports along with leading pundits Tim Sherwood, Les Ferdinand, Emmanuel Petit and Craig Burnley.