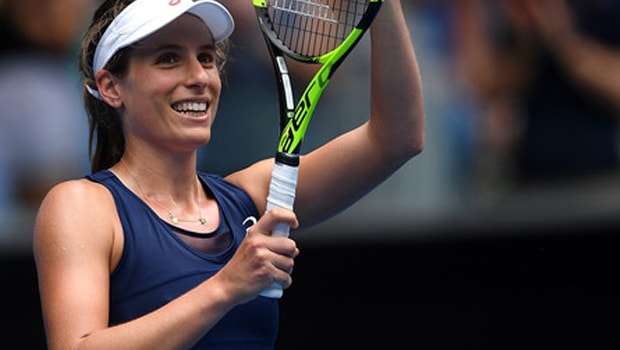 Johanna Konta admits it will be an ‘incredible honour’ when she takes on Serena Williams in the quarter-finals of the Australian Open.

The British number one booked her place in the last eight with an impressive 6-1 6-4 victory over Russia’s Ekaterina Makarova on Monday and she is still yet to drop a set in the competition.

The 25-year-old’s reward for making it through to the quarter-finals at Melbourne Park for the second successive year is a mouth-watering clash with 22-time major winner Williams.

The two players have never previously met, but Konta is relishing the prospect of taking on one of the all-time greats of the game, a player she enjoyed watching when she was growing up.

“That’s going to be an incredible experience for me, she’s one of the few players still playing that I watched growing up as a girl and when I was wanting to be a professional tennis player,” the world number nine said.

“It’s an incredible honour and I can’t wait to share a court with her.

Once on court against anyone, everyone is out there to compete and hopefully walk off the winner but in terms of enjoying the opportunity against someone like Serena, I will cherish every single minute out there.”

Konta reached the semi-finals in Melbourne 12 months ago, her best performance in a major to date, and she is priced at 2.70 to book her place in the last four once again, while Williams is available at 1.44 to reach her eighth Australian Open semi-final.