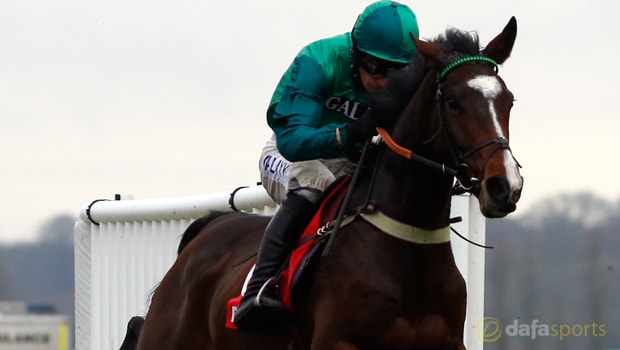 Messire Des Obeaux looks set to compete at the upcoming Cheltenham Festival after his impressive showing in the Grade One Challow Hurdle at Newbury on Saturday.

The Alan King-trained gelding secured his third straight victory at the weekend, seeing off competition from Baltazar D’allier to win by two lengths.

The Simon Munir-owned horse is now almost certain to run in the two-and-a-half mile Neptune Investment Novices’ Hurdle at the 2017 Cheltenham Festival in March, although Anthony Bromley, who manages horses owned by Munir, has ruled out running the four-year-old over a longer distance this season.

Bromley said: ‘He will go to trials day at Cheltenham at the end of the month so he gains experience of the track and then the Neptune at the Festival.

“I don’t think he will get an entry for the (three-mile) Albert Bartlett. He travels too strongly for that race.

He will ultimately be a three-mile chaser but he has plenty of toe.”

Messire Des Obeaux will be making his second appearance at the Festival this year, following on from his seventh-place finish in the Fred Winter Juvenile Handicap Hurdle at Prestbury Park in 2016.

The French horse is likely to face a tough test if he is to secure a victory at Cheltenham this year as he is expected to come up against the Gordon Elliott-trained Death Duty and Irish gelding Invitation Only during the race on March 15.