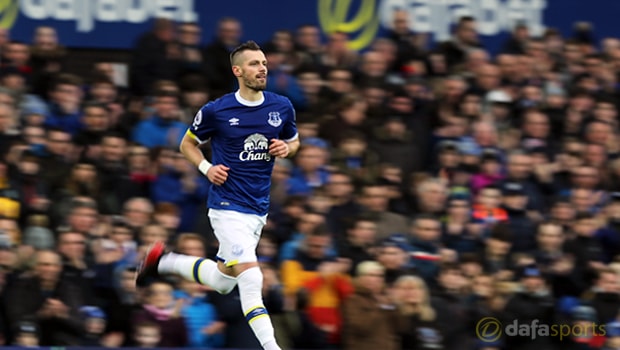 Morgan Schneiderlin insists Everton are capable of catching Manchester United and Liverpool in the Premier League this season.

The French ace made the switch to Goodison Park from Old Trafford in the January transfer window and he feels it is a realistic target to catch the Red Devils and Merseyside rivals Liverpool in the table.

Everton, currently seventh, have five points to make up on United and six on Liverpool – the two teams directly above them.

Schneiderlin says that is now an attainable target as the club seeks to secure European football for next season.

“We want to finish high and catch the teams above us,” he said. “Liverpool are six points clear, Manchester United are five – so why not? We can catch them if we had a good run of games.

We need to finish strong so we want to give the fans Europa League football for next season and build a platform.” Everton have been on a fine run since Christmas, winning five and drawing two in the league.

They were knocked out of the FA Cup during January but, after scoring six against Bournemouth last weekend, confidence is flowing ahead of this weekend’s trip to struggling Middlesbrough.

Schneiderlin is also enjoying being reunited with his former manager Ronald Koeman, whom he flourished under during their time together at Southampton.

“He says what he thinks, but that’s important,” Schneiderlin said. “He wants the players to improve. But he is very calm.

He keeps his head on his shoulders no matter if things are going well or bad.

“He tries to say good things and keep it straight. He is a winner – as both a player and as a manager, so it’s important we do this for him.”

Everton are 2.10 to beat Middlesbrough on Saturday while the Toffees are 41.00 to finish in the top four this season.