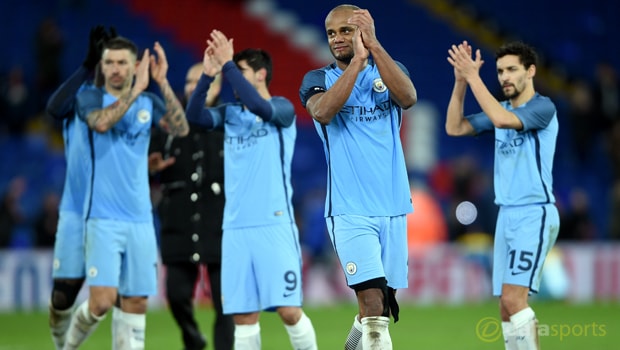 Manchester City manager Pep Guardiola was delighted after seeing Vincent Kompany come through his return to action in the FA Cup win over Crystal Palace unscathed.

The Citizens overpowered Palace at Selhurst Park with goals from Raheem Sterling, Leroy Sane and Yaya Toure booking their spot in the fifth round.

Having thumped West Ham 5-0 at the London Stadium in round three, it continued the serene progress Guardiola is making through his maiden FA Cup journey.

Belgian central defender Kompany played the full 90 minutes on his return from his most recent injury layoff, nine weeks after suffering knee-ligament damage and concussion at the same ground.

Guardiola was delighted to have the 30-year-old back in the fold with a crucial period in the Premier League looming and a Champions League last-16 tie with Monaco on the horizon next month.

“We are happy for Vincent. He’s had a long time away and he played 90 minutes with no injuries,” said the City boss.

“Now he can go forward with confidence and we have another player for the Premier League, FA Cup and Champions League which is very important because the games will come thick and fast now.”

Guardiola singled out David Silva for special praise, insisting his fellow Spaniard had once more shown his supreme ability when it comes to the timing of his passes.

“While it’s good to have a clean sheet because of the goals we’ve conceded lately, it is also important to score goals, which we did,” he added.

“We can play better but I’m happy and David was amazing the way he kept waiting and waiting for the right moment before playing in Leroy.”

Man City are 5.00 to win the FA Cup this season. Chelsea are 4.50 while Tottenham are 6.50 – both London clubs having joined City in round five.