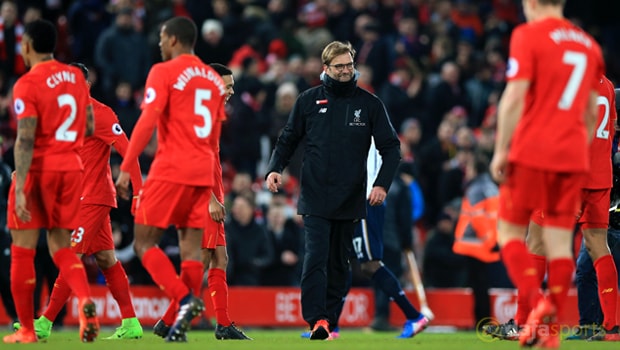 Liverpool manager Jurgen Klopp insists his players are still not thinking about the Premier League title despite beating Tottenham on Saturday.

The Reds, 34.00 to win the title, moved back up to fourth on Saturday night after they beat Spurs 2-0 at Anfield.

Klopp’s side had beaten Manchester City at the end of last year but won just once since then, with a 1-0 win over Plymouth Argyle in an FA Cup third-round replay their only success.

Four defeats in five games had piled the pressure on the former Borussia Dortmund man but he was delighted with his team’s display as they returned to winning ways.

Despite the convincing victory, the German insists nobody within the camp is thinking about the title race.

“Our offensive part of the game was really strong, really direct, really clear. We showed fight and we played. We really concentrated and improved defensively in this game.

It was really good and well deserved. “What would you think if I said we could get them [Chelsea]? Really ambitious or crazy? I am not too interested in this at the moment.

“The only possibility to win something is to win football games. We started, if you want, 2017 tonight. We should not go nuts immediately. Let’s take it step by step.

“Chelsea don’t look like they could struggle over the (remaining) week but we will try everything to get as many points as we can from the season.”