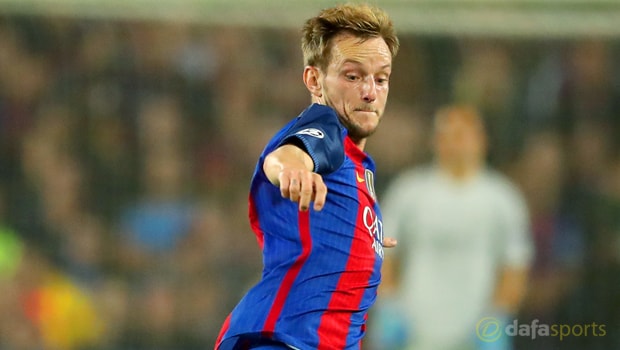 Midfielder Ivan Rakitic has stressed he has no intention of leaving Barcelona and is keen to agree fresh terms with the Catalan giants.

The Croatian playmaker, who joined from Sevilla in 2014, has been linked with the likes of Manchester City and Juventus while there have also been claims he has turned down the offer of an extension at Camp Nou.

Rakitic has now stated he has not rejected any deal as nothing has been put forward to him.

However, the 28-year-old revealed discussions are ongoing between himself and the club and is hopeful a deal can be reached in the near future.

He told Mundo Deportivo: “My dream is to stay here forever. The [club] president and my representative Arturo Canales are in talks to reach the best thing for both [parties].”

He added: “I have not been able to reject any offer because we are talking. I trust that I will stay – I trust in the president and in my representative Arturo Canales, who are in talks.”

Barcelona take a 1-0 lead into their Copa del Rey quarter-final second-leg clash with Real Sociedad on Thursday and are available at 1.30 to secure the win.

Barca will be without midfield pair Sergio Busquets and Andres Iniesta so Rakitic should be included in the starting line-up. A 2-0 win for Barcelona is 7.50 while a 4-1 victory for the Camp Nou outfit is 16.00.