Holders Ivory Coast out of Africa Cup of Nations 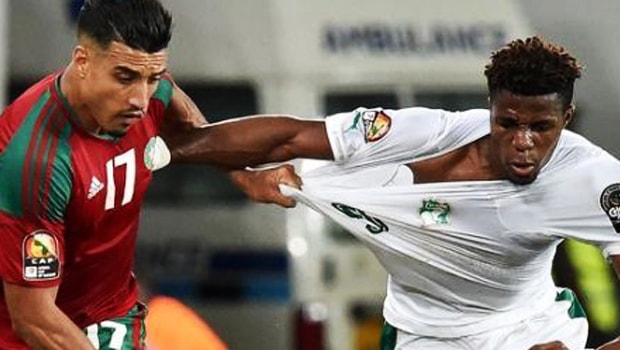 Africa Cup of Nations holders Ivory Coast are out of this year’s tournament after suffering a 1-0 loss to Morocco in their Group C clash.

Ivory Coast went into the game knowing they needed to win in order to progress to the last-eight but, despite dominating possession, they rarely threatened to get the goal they needed as they looked shorn of creative ideas.

Rachid Alioui scored with a terrific shot from 25 yards just after the hour to earn the win for Morocco and their coach Herve Renard, who had led the Ivorians to the 2015 title, their second tournament win.

Ivory Coast were fairly listless throughout the game. Crystal Palace winger Wilfried Zaha shot weakly at the Moroccan keeper from 12 yards with one of their better chances, while Salomon Kalou’s header from a tight angle clipped a post.

Even after going behind the Elephants were unable to cause the organised and disciplined Morocco defence any problems, as they surrendered their title in uninspiring fashion.

The Moroccans arrived at the Stade d’Oyem knowing a draw would likely seal their spot in the knockout stages and they approached the game accordingly under experienced boss Renard.

DR Congo are also through from Group C, finishing top of the table after beating Togo 3-1 in the other game to maintain their unbeaten record.

The Ivory Coast leave Gabon having failed to win any of their three games.

Morocco will play the winner of Group D in the last eight on Sunday in the quarter-finals, with Ghana needing only a point from their final game against Egypt to claim that berth.