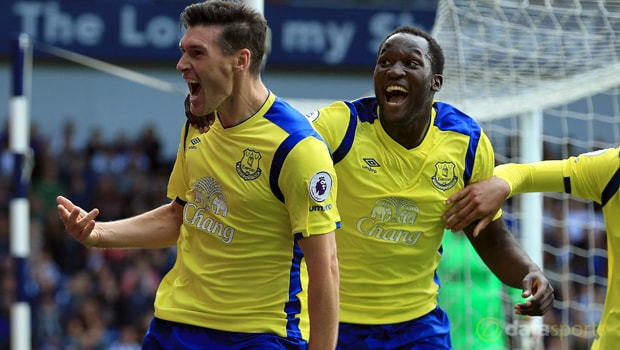 Gareth Barry believes Everton team-mate Romelu Lukaku can score the goals that will see the Toffees qualify for the Champions League this season.

The 23-year-old Belgian scored four goals on Saturday as Everton saw off Bournemouth in a nine-goal thriller on Merseyside. Lukaku is now second in Everton’s all-time Premier League scorers’ list on 59, just one behind Duncan Ferguson.

While he has in the past been linked with moves away from Everton in a bid to secure his chance to play in the Champions League, Barry has told Lukaku he can achieve his desire to mix it with Europe’s elite by staying at the club.

With Ronald Koeman attracting top-class talent to Goodison Park, Barry feels the club are on the verge of achieving big things and he knows that retaining Lukaku is a big part of their future plans.

“There have been a few stories over the last couple of years about Rom wanting to play football at the highest level – and that is the Champions League,” Barry told the Everton website.

“I’m sure he would have had conversations with the powers at the club and they are desperate to get there. With the signings we are making and the manager we have got at the minute, that is the road we want to go.”

Barry, 35, has played with plenty top-class strikers in his career but he feels Lukaku is ahead of them all in his desire to put the ball in the back of the net.

“I don’t think I have met a player who is so hungry to score goals,” added Barry. “He is desperate to keep on improving. He is a great finisher already but he won’t stop there – he is working hard all the time.

“That mentality he has got to stick the ball in the net is taking him a long way at the moment for someone so young, which people forget.” Lukaku is 4.75 to finish this season as the Premier League’s leading goalscorer.