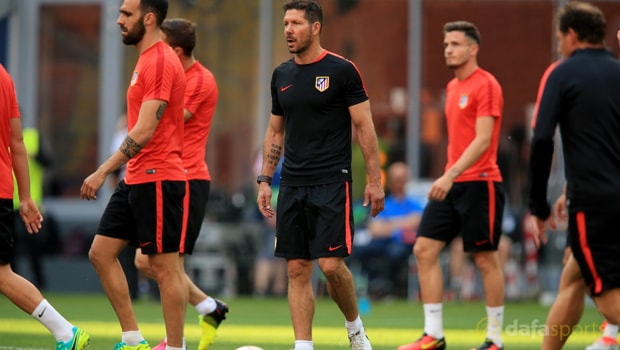 Diego Simeone feels Atletico Madrid have a strong chance of making the Copa del Rey final despite losing their semi-final first leg against Barcelona at the Vicente Calderon.

Barca took a big step towards reaching their fourth successive Copa del Rey decider when Luis Suarez and Lionel Messi scored outstanding individual goals during the first half in Madrid.

Suarez skipped away from two defenders before firing past Miguel Angel Moya in the Atleti goal after seven minutes while Messi shot home powerfully off the woodwork from outside the box not long after the half-hour mark.

Simeone’s side responded after the break and an Antoine Griezmann header cut the deficit in half.

Despite piling on the pressure late in the game, the home could not force an equaliser but their coach remains confident they can turn things around next Tuesday in the Nou Camp.

“In the second half, we were much closer to how we wanted to be,” Simeone said.

“I’m very happy with the image we showed in the second half, with our intensity and attitude. We leave here with the sensation that if we play like that in the second leg, we can still go through.”

With Barcelona struggling to cling onto Real Madrid’s coattails in La Liga, coach Luis Enrique labelled the cup success as a “huge result” for his side, admitting they had been severely tested in the second half.

“You could say we should have been more effective in the second half and finished the tie off, but that’s just theory, the reality is they had a lot more chances than us,” he said.

“There’s things I need to improve but it’s a huge result for us.”