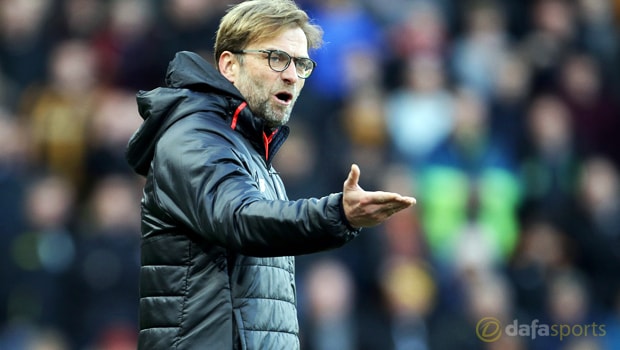 Liverpool boss Jurgen Klopp says his side’s priority for the remainder of the season is to secure Champions League qualification following their 2-0 defeat at Hull on Saturday.

The Reds went into 2017 challenging for glory on three fronts, but a run of one win in ten games has seen them exit both domestic cup competitions and slip 13 points behind Premier League leaders Chelsea.

Klopp admits qualifying for next season’s Champions League is now his side’s main priority, although he knows it will be easier said than done with so many teams challenging towards the top end of the Premier League table.

“We need to show much more consistency,” the German said. “The Champions League is an outstanding, big, big, big target – so many teams want to play there.

“To qualify for the Champions League in England is difficult because there are so many challengers, but on the performance of today we don’t have to talk about this. We have to show now that we work, that we are really ready to go for everything.”

The 49-year-old knows his side need to pull together as they bid to bring their recent poor run to an end, but things do not get any easier for Liverpool, as they face second-place Tottenham at Anfield on Saturday.

He added: “We have to show it together. In a few days we have another opportunity to play and we need to show we are ready for all the other games.”

Liverpool are available at 1.80 to secure a top four finish come the end of the campaign, while they are an outside bet at 51.00 to overcome the points gap and win the title this term.