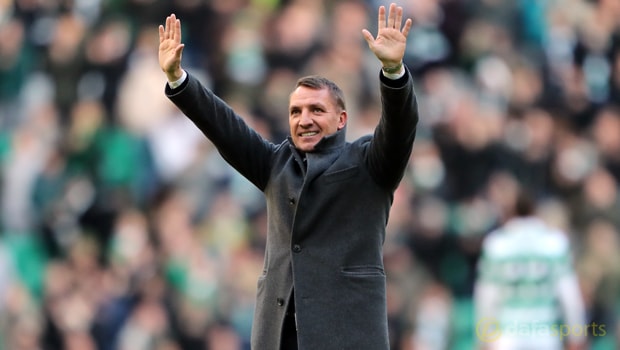 Brendan Rodgers has vowed that Celtic will work hard to continue their record-breaking unbeaten sequence.

The Hoops made it 27 domestic games without defeat since the season started when they swept past Hearts 4-0 in Glasgow on Sunday.

That victory meant Rodgers’ team eclipsed the previous Scottish record that was set by Celtic’s greatest ever team, the Lisbon Lions in 1966/67.

The current Celtic boss is fully aware of how much it means to have beaten the record although he has no problem admitting his players need to go much further before being considered equals of the European Cup-winning idols.

“1967 was a real unique season in the great history of this club. It’s still celebrated now and always will be. That team are out there on their own,” Rodgers told the Celtic website.

“When you reflect on Sunday, it really shows what a difficult achievement it is to do.

“For that to happen, and for us to break the record and stand alone as a team, the players have opened up a new page in the history of Glasgow Celtic, and it’s up for us to continue writing the next part of this great club’s history.”

Aberdeen are next up for Celtic on Wednesday night and Rodgers wants his players to work hard and remain unbeaten for as long as possible.

“For that, it’s pretty straightforward. We just continue to do what we are doing, train very hard and be super-professional in our approach,” he added.