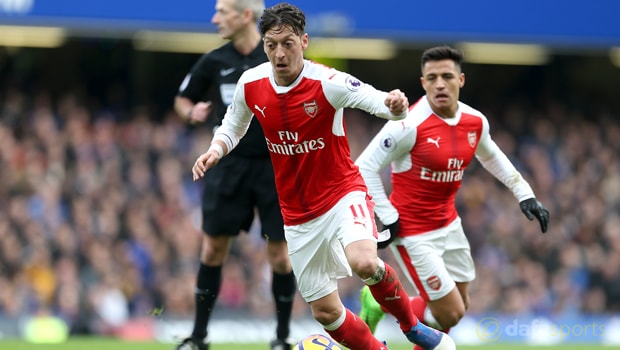 Arsenal midfielder Mesut Ozil is currently suffering from a lack of confidence, having not scored a goal in eight matches, according to boss Arsene Wenger.

The 28-year-old has struggled to have a big impact in recent games as the Gunners have endured a turbulent time on the field.

The Germany international, who signed for a club-record £42million from Real Madrid in 2013, last hit the back of the net when Arsenal saw off Stoke 3-1 on December 10.

Wenger is keen to see his playmaker get back among the goals as they prepare for an important stage of the campaign with the Champions League set to get back underway.

Arsenal, who are priced at 23.00 to win the Champions League, take on German giants Bayern Munich in a last-16 first-leg clash on Wednesday at the Allianz Arena and Ozil could be key to getting a good result.

The Frenchman insists he is in the dark over his midfielder’s drop in form but feels a goal will help to restore his confidence levels.

Wenger said: “I don’t know why he is underperforming – it can happen. It’s time for him to score again. “Maybe he will find confidence back as well, because he misses chances.

He has chances and he misses the chances that don’t look not feasible for him. “I felt he did not feel confident against Hull.

It’s always a problem because you think he can deliver something special but it’s true that technically he missed things that he is not used to.”