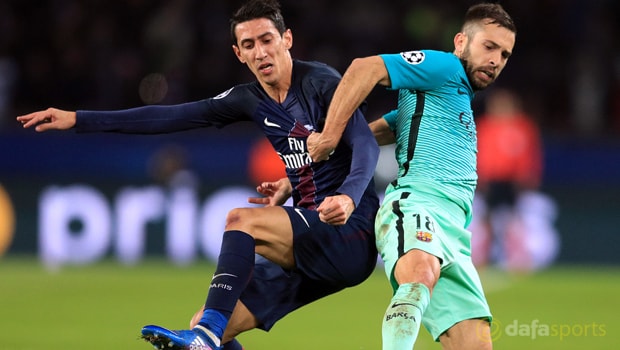 The Argentine was one of the heroes of the evening, netting twice against the ragged Blaugrana, with Julian Draxler and Edinson Cavani also on target for Les Parisiens.

Unai Emery’s side were the better team from the off and will head into next month’s second leg safe in the knowledge that no team has ever overturned a four-goal deficit in Europe’s biggest club competition.

PSG initially struggled this season following the departure of iconic striker Zlatan Ibrahimovic and boss Laurent Blanc, but they have hit their stride in recent months and are unbeaten in their last 14 competitive matches.

The French club have threatened to make an impact on Europe’s biggest stage for some time and on his 29th birthday, Di Maria believes they proved they now have the ability to go all the way.

“It’s hard to think of a better birthday or a better performance than this,” he told BT Sport. “Our aim is to reach the final and win the Champions League.

We are getting there gradually and moving forward – this was a tough game against one of the best teams in the world, so we did a great job.

“We’ve been showing this for a few years now. We controlled the game for 90 minutes. It’s not easy to control Neymar, (Luis) Suarez and (Lionel) Messi, but we managed it.”

Tuesday’s win has seen Paris Saint-Germain shorten to 7.00 to win the Champions League, with Bayern Munich the 4.00 favourites ahead of holders Real Madrid (5.50).