There was no way Neymar was going to be allowed to leave Barcelona for PSG without Manchester United somehow being dragged into the story, and L’Equipe have obliged.

L’Equipe have taken on something of a crazed status this summer, with the Neymar and Kylian Mbappe sagas sending them over the transfer edge. With both dragging out, there’s been so many claims that some have directed contradicted others, and there’s clearly pressure at the French newspaper to say everything possible on the deals.

In their Wednesday edition, L’Equipe claim that ‘unknown to the public’, but presumably known by them and kept a secret, Neymar almost joined Jose Mourinho at Manchester United last summer.

The Brazilian’s camp agreed personal terms with the Premier League club, who were all 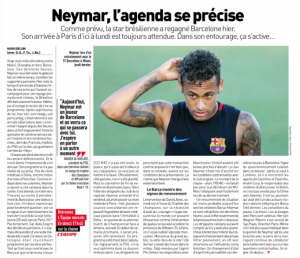 set to pay his €190m release clause at Barcelona. That collapsed when Neymar changed his mind at the last minute, and snubbed Manchester United to instead stay at Barcelona.

This is all providing some worry for PSG, in case Neymar changes his mind again. However, L’Equipe believe it’s less likely, giving PSG some kind of win over Manchester United.