Posted by DafaSports on December 4, 2017

We take a look at some of the best performances from this week’s round of PLeague fixtures.

The Spaniard single-handedly kept Arsenal at bay during United’s 3-1 win at the Emirates. He levelled a Premier League record by making 14 saves during the pulsating encounter and once again demonstrated why many see him as the world’s best between the sticks.

Captain Valencia’s early goal against Arsenal set the tone for Jose Mourinho’s side and he, like the rest of the Red Devils’ back line, put in a heroic performance to ensure his side took all three points in Saturday’s late kick-off.

City were met by a spirited West Ham side at the Etihad on Sunday that put their perfect start to the Premier League season at risk with a first-half goal from Angelo Ogbonna. However, the hosts found their mojo after the break and drew level thanks to the ever-present Otamendi.

The centre-back, who has struggled for form in recent times, made 13 clearances in Everton’s 2-0 win over Huddersfield on Saturday.

Despite producing one of the worst throw-ins of all time and Southampton being held to a 1-1 draw against Bournemouth, Bertrand created three chances for his side, more than any other player in the game.

The little magician popped up with the decisive goal against the Hammers and created more chances than any teammate as City preserved their eight-point lead over Manchester United at the top of the Premier League table.

While most of the praise went to Hazard (see below), Fabregas produced a vintage performance in Chelsea’s 3-1 win over Newcastle on Saturday. He Chelsea’s beating heart and sprayed passes left, right and centre at will against the Magpies.

This man can’t seem to put a foot wrong at the moment. He was the star of the show in Liverpool’s 5-1 thrashing of Brighton, netting once, forcing an own goal and providing two assists.

Lingard’s double proved to be the difference against Arsenal and he always looked lively on the counter-attack when United eventually broke out of their own half.

The Brazilian took advantage of the terrific performances from Coutinho and Mohamed Salah behind him against Brighton. With the help of Liverpool’s star duo, Firmino bagged two goals to take his tally for the season up to five.

Another player who is simply untouchable at the moment. Hazard inspired Chelsea to their victory over Newcastle, volleying home the equaliser and showing his class to put the game out of reach with a ‘panenka’ penalty late on.

Do you agree with our side? 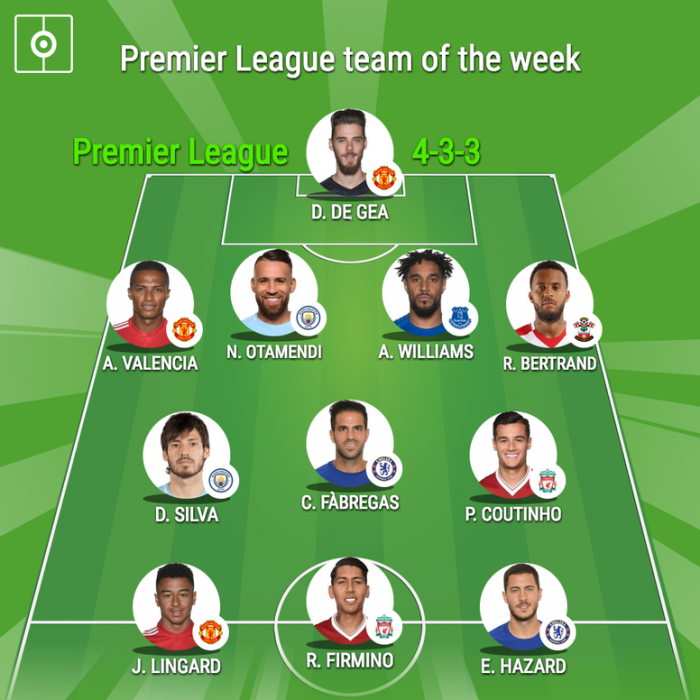