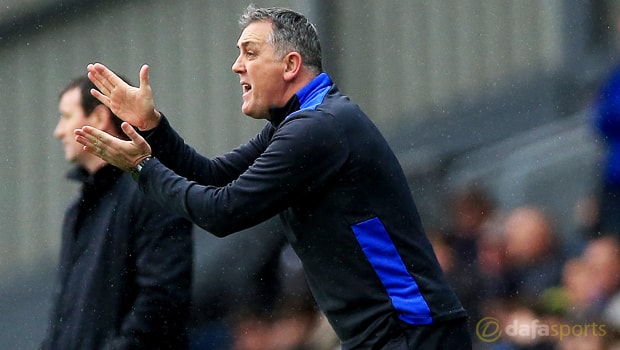 Owen Coyle felt Blackburn Rovers had delivered a professional performance in seeing off Blackpool in their FA Cup fourth round clash at Ewood Park.

The League Two side are managed by former Blackburn boss Gary Bowyer but any hopes of getting one over on his old club were quickly removed.

A Sam Gallagher header and a long-range Elliott Bennett strike had Rovers in control by the interval before the second-half dismissal of Kelvin Mellor ended Blackpool’s hopes of a fightback.

Coyle paid tribute to the manner in which his team took care of the challenge, and with plenty FA Cup upsets to choose from this season, the Scot was relieved not to be a victim.

“I thought it was a very professional performance and one that we needed,” the manager told Radio Rovers.

“You only need to look through the results in the competition to see the shocks that have taken place.

“So we had to make sure that from the first whistle we were on our mettle. We had to be patient as we knew that Blackpool would bring everybody behind the ball.”

Blackburn won away at Queens Park Rangers in round three and with their spot in the last-16 now secured, Coyle admits they will be waiting for news of Monday’s draw with real excitement.

He knows it could mean plenty to the club and fans should Ewood Park host a fifth round tie, especially with the likes of Chelsea, Arsenal, Manchester City and Tottenham in the hat.

“It was important to win the game and put ourselves in the last-16 and who knows what tie we’ll get now,” he added.

“We’d over 9000 fans here today, a very good crowd for this stage of the competition and I want to thank those fans for coming here today and getting behind the players and helping them through.”

Blackburn are 126.00 to win the FA Cup this season. Premier League leaders Chelsea are favourites for Wembley glory at 4.50.