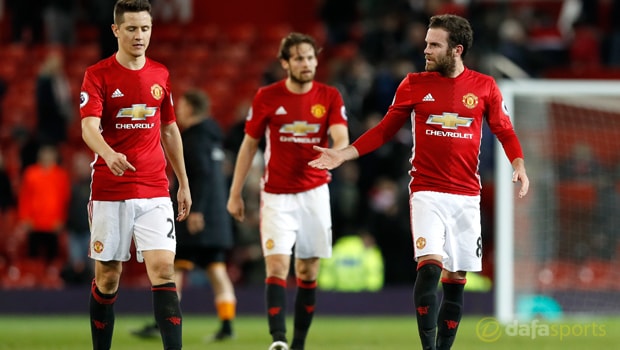 Midfielder Ander Herrera is convinced Manchester United they are getting stronger under Jose Mourinho.

The Spaniard feels that the long unbeaten run they are enjoying in the Premier League – which now stretches to 15 games – has delivered a warning to the clubs above them that they are ready to battle for a top-four finish.

Herrera does not hide the fact that Chelsea are likely to win the title but he feels there are six clubs behind the Blues all chasing three remaining Champions League berths.

“That’s what we want,” the Spain international said when asked if those above them will be worried about United.

“I think the fight with the first six teams in the league – and I add also Everton because they have a very good team – will be very tough.

“We all want to be in the top four and there’s still a lot play for, but I think we are in a good moment. They can see Man United is chasing us”.

The Red Devils ended a three-game winless streak in the league last weekend by overcoming champions Leicester 3-0 at the King Power Stadium.

Herrera felt they easily could have taken maximum points from their stalemates against Stoke City and Hull City during that run.

With the Premier League top-four race heating up, an EFL Cup Final against Southampton to come this month along with their FA Cup last-16 game against Blackburn and the Europa League last-32 tussle with St Etienne, Herrera is happy with where United are at.

“We are fighting for a lot of things. Three competitions plus the Premier League, the race for the top four,” he added.

“I think we have a lot of things to play for. All the players in the squad want to play as many games as possible.”

United are 5.00 to win the Europa League this season while they are 2.20 to finish in the Premier League’s top four.