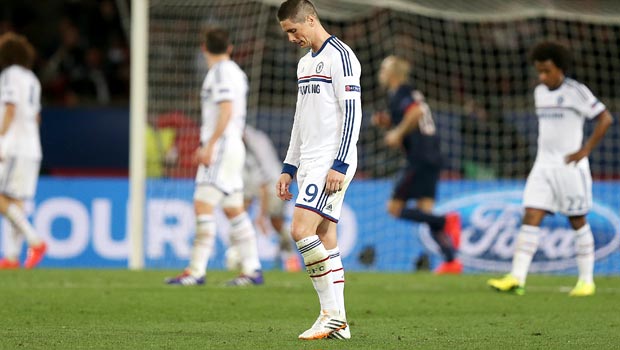 Fernando Torres continues to struggle to win over the doubters at Stamford Bridge but manager Jose Mourinho insists that the Spain international still has a future at Chelsea.

Roman Abramovich saw enough in the World Cup winner to splash out a British record of £50m for his services in January 2011 although he hasn’t yet delivered the kind of return that he enjoyed at Anfield.

Torres has managed just nine goals in all competitions so far for the Blues this season and was overlooked for Wednesday’s Champions League clash at Paris Saint-Germain, despite the absence of Samuel Eto’o.

Mourinho opted to go without a striker in Paris, utilising Andre Schurrle in the forward position, but insists that Torres remains in his future plans at Stamford Bridge.

“Does he have a future? Yes, he has,” Mourinho said.

“He is under contract, he’s a good professional. He works hard for the team, he brings positive things to the team.

“When he’s on the pitch he tries to do his best. Obviously we want more. Obviously.”

Mourinho added: “He’s the first one that wants more, but he’s the kind of player I respect, he deserves to be respected and there’s nothing more you can say about it.”

Despite the words of encouragement, Torres has been linked with a move away in the summer with Inter Milan credited with an interest, while many are expecting a big-money move for a striker from Mourinho.

Radamel Falcao had long-been linked with the Blues although the latest reports claim Chelsea will make a move for the Colombian’s former Atletico Madrid team-mate Diego Costa, who has bagged 32 goals in 36 games for Los Colchoneros this season.