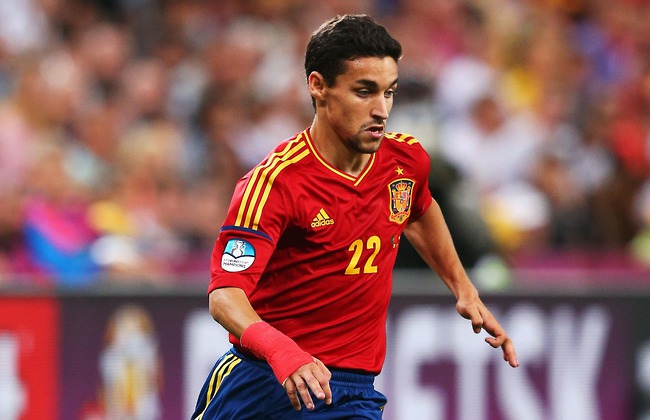 Jesus Navas has set his targets high after completing his move to Manchester City.

Jesus Navas has set his targets high after completing his move to Manchester City and insists he will be looking to help the Citizens win the Champions League.

The Spain international completed his move to the Etihad Stadium earlier this week in a deal that initially costs the Premier League side £14.9m.

He is the second player to arrive at the club already in the close season following the capture of Fernandinho from Shakhtar Donetsk for a fee of £30m as City look to bounce back from their failure to win a trophy last season.

Roberto Mancini had suggested last term that the club had shot itself in the foot by failing to act quickly enough in the transfer market, a mistake that City will seemingly not be making this time around.

Manuel Pellegrini is widely accepted to be installed as the new manager and may yet be keen to bring further signings to the Premier League runners-up, although Navas is confident the squad is already strong enough to challenge for the biggest prizes.

The 27-year-old has won both the World Cup and European Championships with Spain but is now targeting the biggest club prize, something which will go down well with the fans, having watched their side fail to progress from the group stages in the last two campaigns.

“I’ve won some important titles, but the Champions League is something you always have in mind,” said Navas, quoted in The Sun. “Also I want to enjoy the Premier League and have a really strong year.

“Individually, City have such good players and the idea of playing there with such amazing players and fighting for a title – because I feel we have the team to do that – is amazing.

“The challenge we have is to win important titles. I think pressure is great, it can make the game more exciting and force us to play our best.”

City have been linked with moves for a new striker with both Edinson Cavani and Stephan El Shaarawy said to be of interest, while defensive reinforcements could be drafted in following the loss of Kolo Toure and doubts surrounding the future of Joleon Lescott.