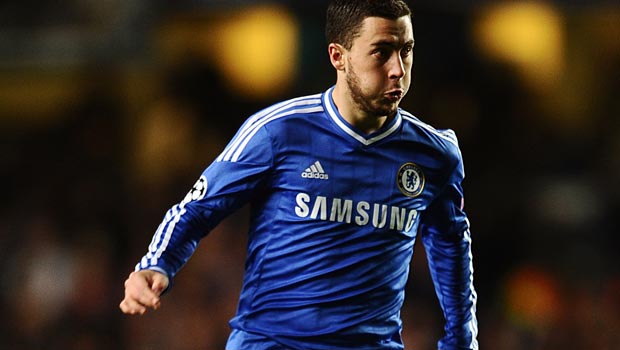 In-form Eden Hazard has admitted he is approaching every game for Chelsea at the minute determined to be the matchwinner.

The Belgium international, who joined the Blues from Lille in the summer of 2012, has had an outstanding campaign, scoring 14 goals and providing seven assists for Jose Mourinho’s title-chasers.

Hazard has arguably been Chelsea’s stand-out performer across the whole campaign and he readily admits he goes into games now with a real desire to make the difference.

He said: “A few years ago, football was just football for me. If I didn’t score, I didn’t care too much, as long as we won the game.

“Now I want to score in every game and be decisive.”

Unsurprisingly, the 23-year-old is popular amongst his team-mates and he’s revealed Samuel Eto’o is constantly telling him he can be one of the best players in the world in the future.

He added: “Eto’o tells me every day that I can be one of world’s best players,” he added to La Derniere Heure. “Before every game he tells me I have to make the difference.

“He tells me: ‘You don’t leave the stadium without scoring a goal.’
After a while you understand that.”

Chelsea are four points clear at the top of the table but that gap could be reduced with Man City and Liverpool both in action over the next few days, ahead the Blues’ trip to struggling Crystal Palace (Chelsea 1.45, Palace 6.50, draw 3.90) on Saturday.