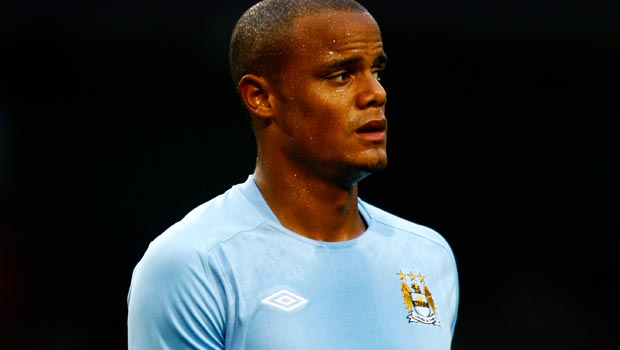 Manchester City skipper Vincent Kompany is sticking to the party line of no complacency as his side thumped their rivals Manchester United 3-0 at Old Trafford on Tuesday.

A brace from Edin Dzeko and a late goal from Yaya Toure was enough to secure the bragging rights in the city but, more importantly, the win closes the gap on both Chelsea and Liverpool at the top.

Much has been made about the power shift in Manchester and nowhere was that further highlighted than in the performance of Manuel Pellegrini’s men at Old Trafford.

Kompany was delighted with the result against the Red Devils but the Belgian centre-back has already switched his attention to their next Premier League outing against Arsenal on Saturday.

He said: “It’s just one little step. The other teams are still very good.

“I mean games have to be played. As long as we don’t have the points, I don’t consider ourselves there yet.

“With the game against Arsenal, obviously it’s good in a way, because you don’t have to make a big effort to get the lads focused again.”

The Gunners have seen themselves drop out of the title race over the last couple of games after a 6-0 defeat to Chelsea and a 2-2 home draw to Swansea City on Tuesday night.

A clash with Man City is the last thing Arsenal boss Arsene Wenger would have wanted and it would be surprising if the Citizens did not secure the win, given their fearless performance at Old Trafford.

City are 2.05 to take all three points from the capital, 3.41 to be held to a draw and 3.14 to come away from the Emirates with nothing to show for their efforts.