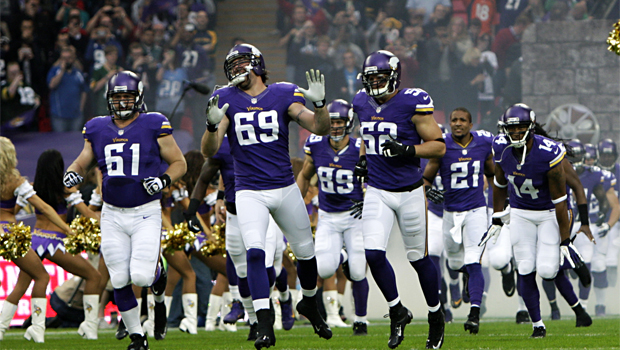 It has been revealed that London will host three NFL games next year as rumours grow that the city might eventually have its own franchise.

The Jacksonville Jaguars, Atlanta Falcons and Oakland Raiders have all agreed to play in the capital as the ‘home’ team in 2014, with their opponents yet to be named.

The popularity of American Football in the UK continues to grow and there has been one NFL match at Wembley each year since 2007.

The stadium is generally sold out for the matches and the fans again flocked to north London last month as the Minnesota Vikings beat the Pittsburgh Steelers 34-27 in front of a crowd of 83,000.

Gridiron fans in the UK will have a double dose this season as the Jaguars and the San Francisco 49ers will do battle on the hallowed turf on October 27.

And NFL commissioner Roger Goodell feels the decision to stage three games next year is proof that the sport has never been so popular in the UK.

“Both of this year’s games in London sold out quickly. The fan enthusiasm for our sport continues to grow,” he said. “By playing two games in the UK this year, we are creating more fans.

“We hope that with three games in London next year we will attract even more people to our game.”

The Jaguars have committed to four games in London over the next four seasons and owner Shahid Khan, who recently bought Fulham FC, sees it as a positive move.

“The experience the Jaguars have had already in London has been every bit what we anticipated and more,” he said. “And this is all before we’ve even played our first game in Wembley Stadium.”