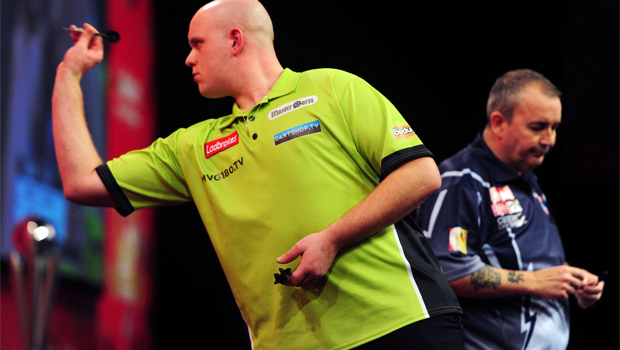 Defending champion Michael van Gerwen put down a marker with an impressive display to beat John Part in the first round of the World Grand Prix.

The 24-year-old hit the ground running and raced to the first set with back-to-back 12-dart legs and a stellar average of 109.98.

But Canadian Part showed why he is still a force to be reckoned with at the age of 47 as he forced the Dutchman into a deciding leg in the second.

However, ‘Mighty Mike’ upped his game when required to take it 3-2 and claim the match, with compatriot Raymond Van Barneveld now waiting in the next round in Dublin.

Van Gerwen was relieved to get through and made it clear that it was not all plain sailing.

“People think it’s very easy but there was a lot of pressure for me in this game,” he said.

‘Barney’ beat Stuart Kellett by two sets to nil but was up against it early on as his opponent missed double top to take the first set.

But, once the 46-year-old had taken the opener, he raced away with the second to reach the last 16.