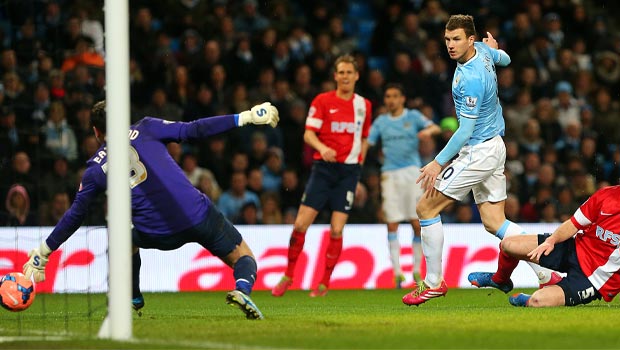 Manchester City boss Manuel Pellegrini watched on as his side dismantled Blackburn Rovers 5-0 in the FA Cup on Wednesday night to maintained their push for the ‘quadruple’ this season.

The Chilean tactician will have enjoyed seeing all his top strikers get on the scoresheet with braces for both Alvaro Negredo and Edin Dzeko, while fit-again Argentine star Sergio Aguero put the ball in the back of the net with just his second touch after coming off the bench.

Not only was it another impressive home performance from City, admittedly against a Championship side, but it also saw the club reach 99 goals for the campaign so far.

Another second tier side lie in wait in the fourth round of the FA Cup in the form of Watford and they will have to produce something special to stop City, who are 4.00 to go all the way and lift the famous trophy at Wembley this term.

Pellegrini was pleased with what he saw at the Etihad Stadium on Wednesday night and hopes his side can produce much more of the same for the remainder of the campaign.

City’s next test comes on Saturday in the Premier League when they will be looking for revenge against a Cardiff City side who beat them earlier in the campaign.

With Pellegrini’s side once again on home soil, the hosts are 2.060 to score over 3.5 goals against the Bluebirds and given their current goalscoring record at the Etihad, it might be hard for the visitors to keep the score down.