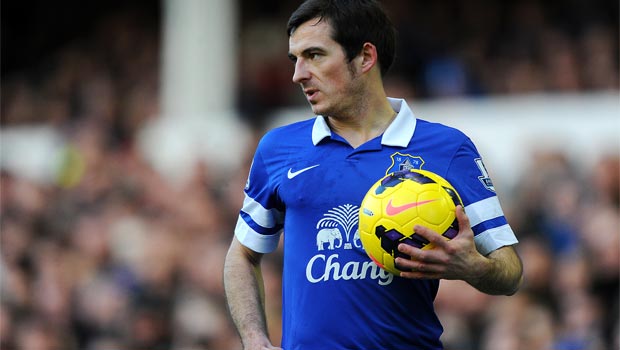 Reports that Leighton Baines is close to agreeing a new long-term deal at Everton prove that Roberto Martinez means business at Goodison Park.

The Spanish tactician has changed the footballing philosophy of the Toffees after just six months in charge and, after years of playing limited football under previous boss David Moyes, they are now entertaining fans up and down the country.

And the new open style has not come at the expense of results, as the Merseysiders currently sit in fifth place in the Premier League table with 41 points from 21 games played.

They are one point behind local rivals Liverpool and have taken four more points that United, as Moyes overseas a period of change at Old Trafford.

The Red Devils’ chief has made no secret of his desire to take Baines to the Theatre of Dreams but Everton have, to date, repelled two attempts by their former boss to sign the England left-back.

And now it appears as though the Premier League champions will have to look elsewhere, with the former Wigan man reportedly set to sign a deal that will keep him at Everton for the rest of his career.

The news will come as a relief to Toffees’ fans, after young midfielder Ross Barkley was ruled out for up to six weeks with a broken toe, and will give all at the club a shot in the arm as they head into the business end of the campaign.

Baines has always been a talented player but has enjoyed a new lease of life under Martinez and looks set for a battle with Ashley Cole to start England’s first game at the World Cup in Brazil.

Before the summer’s showpiece gets underway, the domestic trophies will have been handed out and, while Everton might not fill their cabinet this season, the ambition of the club under their talented manager is plain to see and Baines will be a big part of any future success.