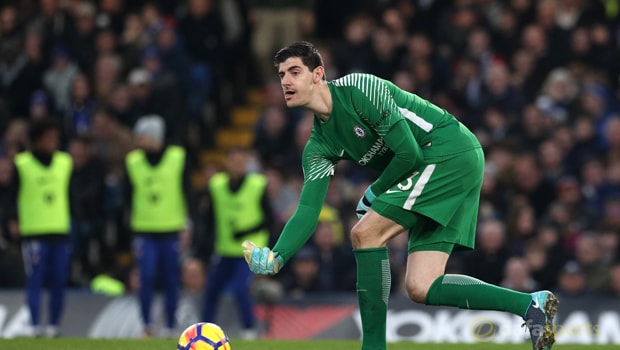 Chelsea goalkeeper Thibaut Courtois has hinted that he would be open to an approach from Real Madrid, though he remains happy at Stamford Bridge for now.

The 25-year-old, who is under contract with Chelsea with 2019, has been touted as a potential transfer target for the La Liga giants and he admits his personal situation would make a move to the Spanish capital appeal strongly.

The shot-stopper is in talks with Chelsea to extend his current deal but in an interview with Belgian publication Sport/Foot Magazine, he says “his heart is in Madrid”.

“My personal situation is related to the city of Madrid,” he said.

“My two children live there with their mum. I have my daughter every day on FaceTime. She often tells me that she misses me. My son is still too small to communicate like that.

“Whenever I have the opportunity, I try to return to Spain. As a situation, it is not always easy. Yes, my heart is in Madrid. It is logical and understandable.”

Courtois spent three years at Real’s city rivals Atletico previously, suggesting he “became an adult” during his time in the city.

Whilst he insists there is no immediate desire to leave London, he has told Real Madrid to let it be known if they are indeed interested in his signature.

He also suggested that Chelsea holding onto compatriot Eden Hazard could have an impact on his own future.

“If Real are really interested, my personal situation could influence things. The family aspect is priceless. But I repeat to you that, for the moment, I’m busy talking to Chelsea to extend,” he added.

“There is no rush, I am under contract until 2019. Normally, there is no problem, I will extend. I am happy here and I see a club that still wants to win a lot of titles. The signs are positive.

“Their desire to also extend Eden Hazard’s deal reassures me.”

Chelsea are 26.00 to win the Champions League this season, while Real Madrid are 9.00 to be kings of Europe for the third successive year.