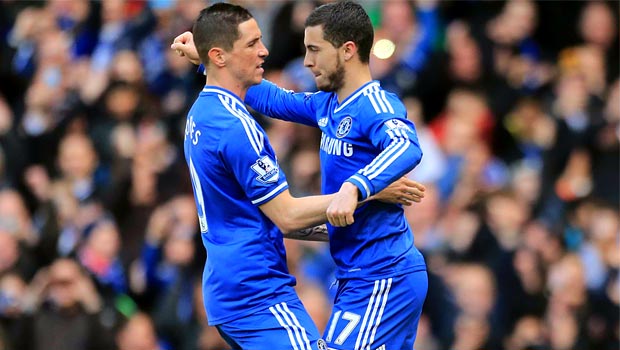 Fernando Torres has defended his troubled three-year stay at Chelsea, saying he has had more highlights with the Blues than during his time at Liverpool.

Torres has scored just nine goals in 30 appearances in all competitions this season and his overall tally since signing on at Stamford Bridge from Liverpool for a staggering £50million fee in January 2011 stands at 44 goals in 161 outings.

By comparison at Liverpool, the Spaniard found the back of the net 81 times in 142 appearances.

In the second part of an interview with Spanish newspaper, AS, Torres was asked to list his top nine individual career highlights.

Surprisingly, two were in the blue of Chelsea, where he has come in for regular criticism for a string of missed chances, and only one as a red, which he described simply as “conquering Anfield”.

First was the goal in the Nou Camp in the Champions League semi-final to send Chelsea to the final in Munich, and then going on to lift the trophy.

He said: “When [Andrés] Iniesta scored to make it 2-0 and with [John] Terry sent off, you think it’s all over. The most likely outcome was for Barca to score five, but that’s when

everyone saw the reaction of a team that wanted to win the trophy and got through the tie to make the final. And we won it.”

“He (Benitez) wanted the team to compete and he convinced us to go out and win the Europa League, the second most important competition in Europe,” Torres added. “It was the second European trophy in two years, and I scored in the final. It was a good year.”

It is likely that this season will be his last in west London with rumours, in the week of his 30th birthday, linking him with a move back to La Liga to rejoin his first club Atletico Madrid, potentially as part of a swap deal with known Chelsea target Diego Costa.

Inter Milan also look prepared to take Torres off Chelsea’s hands should the Madrid deal not materialise, with the Serie A side having sent representatives over to London on Tuesday to run the rule over the striker in Chelsea’s Champions League win over Galatasaray.