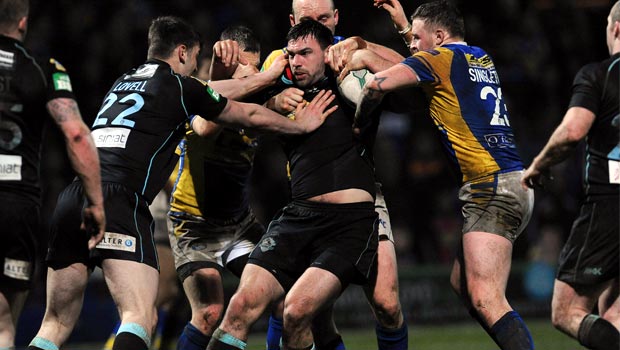 The memories of last season’s struggle against London Broncos are still fresh in the memories of the Leeds Rhinos coaches and players as the most dominant force in recent British Rugby League prepare to take on the Super League strugglers at Headingley.

In what appears to be on paper the most one-sided game of the season, London are being given a 44.5 start on the handicap betting.

The capital side have yet to win in five attempts this season and are only kept off the bottom of the table by Bradford who had points deducted due to their off-field problems.

Meanwhile, Leeds are unbeaten over the same period having recorded four wins and a draw to sit third. But having had to fight all the way to breakdown the Broncos in last season’s corresponding fixture, which the Rhinos went on to win 30-6, complacency, according to all the pre-match talk anyway, should not be a problem.

Rhinos stalwart Jamie Jones-Buchanan believes the Broncos will head north with nothing to lose and will treat the game like a cup final.

“When a team is on a losing streak they are getting closer and closer to a win,” Jones-Buchanan said.

“We will be expecting a great deal from them with the adversity they’ve been through. That makes them very dangerous, because they have got nothing to lose.

“They have got players who are very dangerous and there’s nothing worse than turning up to a game with a mentality that it is going to be easy.

“In those circumstances you risk a) losing and b) picking up injuries. It is important we take this game very seriously.”

Coach Brian McDermott is expecting a response from the Broncos after their humiliating 50-22 reverse at home to Wakefield last week and is wary of a backlash.

He said: “I know a fair bit about their head coach Tony Rea and I am sure he will provide them with enough enthusiasm this week and enough motivation for them to show a response.

“I think they will regard last week as a poor loss against somebody who will be regarded as one of their rivals in the table.

“They will want to do a far better job than that and they will be hurting. I am sure they will want a reaction. Going on current form everybody would tip us to win, but we have got to make sure we’re not the people doing that.”