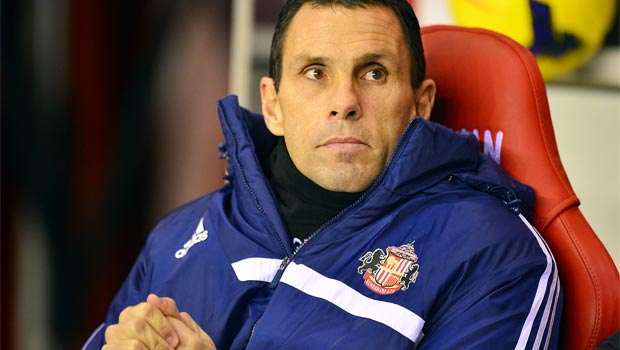 Gus Poyet has warned his Sunderland players that they will need to make some massive improvements if they are to remain in the Premier League this season.

The Uruguayan took over at the Black Cats in October and has quickly gone about trying to fix a number of issues that appeared during his predecessor Paolo di Canio’s somewhat chaotic reign.

Despite losing 4-0 in his first game at Swansea, the Wearsiders have produced some good results, beating both Southampton and Manchester City but things have again started to go awry in recent weeks with defeats to Stoke, Chelsea and Tottenham.

Saturday’s loss to Spurs combined with Crystal Palace’s win over Cardiff saw Poyet’s men cast five points adrift at the foot of the table and next Saturday’s trip to West Ham now looks crucial to their chances of staying in touch over the busy festive period.

However, at the moment they are undoubtedly struggling and despite their improved performances, look in real danger of going down.

Poyet insists his players are giving their all for the side but admits that as things stand they are not in danger of losing their top-flight status.

“At the moment, we are not good enough,” he admitted. “Sometimes being honest doesn’t mean that you are negative. I am not, I am very positive. I am realistic and at the moment, that’s what we are.

“We want to keep going, yes. The desire, the fighting, the spirit – the players are trying their best. At the moment, it’s not enough, so we will see how we are going to change.”