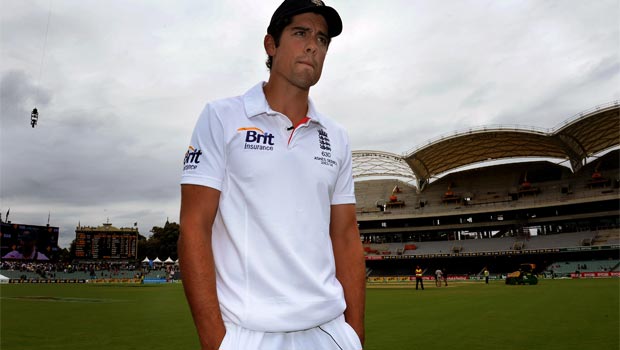 Alastair Cook says England have to pick themselves up quickly and put some pressure back on Australia after the Baggy Greens took a 2-0 lead in the Ashes series.

The Australians took just an hour to wipe out the rest of England’s batting order at the Adelaide Oval on Monday morning to put them within touching distance of winning the Ashes back.

England now move on to Perth and Cook knows another performance like the one in South Australia, and the Ashes are gone.

However, he is refusing to give up just yet and has urged the whole team to show what they are made of when the third Test gets underway at the WACA on Friday.

“We’ve had a big hit and if we believe that the Ashes are gone, they might as well be gone,” he said.

“We have to dust ourselves off and do what we can do, which is work bloody hard on our games and come out to Perth on Friday with that belief that we can do something. We need to put some pressure back on Australia.”

A big problem for England has been the fact a number of key players have been repeatedly getting out in a similar fashion and Cook says that is something they have to address quickly.

“That’s an area of concern: shot selection and shot execution. We can’t shy away from that, some poor shots have been played,” he added.

“That’s honest, and we have to be better than that if we want to get back into this series.”