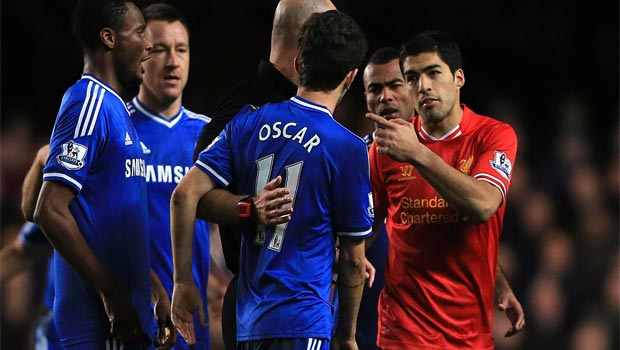 Chelsea boss Jose Mourinho felt Luis Suarez deserved to be booked for simulation afterdescribing the Liverpool striker’s attempt to win a penalty in his side’s 2-1 defeat at Stamford Bridge as an “acrobatic swimming pool jump”.

The Uruguayan forward went down after a clumsy challenge by Samuel Eto’o but referee Howard Webb waved away his appeals for a spot-kick.

Although there appeared to be contact, Mourinho was furious with the Liverpool man who had also gone to ground moments earlier following a penalty box challenge by John Terry.

Mourinho felt his own side were denied a clear penalty after man of the match Eden Hazard tangled with Liverpool’s Lucas Leiva.

“On the other situation with Suarez I would resolve this differently with a yellow card for Luis Suarez. I keep saying I hate players trying to provoke situations. Luis is an amazing player and I have lots of respect for his quality and his attitude of trying to win every game but sometimes he tries too much.

“Eto’o just put his body in front of him. It looks like somebody shot him.”

Mourinho, speaking in his post-match press conference, re-opened the debate about diving and admitted Suarez has changed for the better in the last year under Reds boss Brendan Rodgers.

“He does everything to win and Brendan is doing a fantastic job on him because he’s changed. There’s no doubt that he’s changed,” said Mourinho.

“Culturally people from that area (South America), they like it. It’s not also that area. There’s a corner in Europe where I belong to, that they also like (diving).”