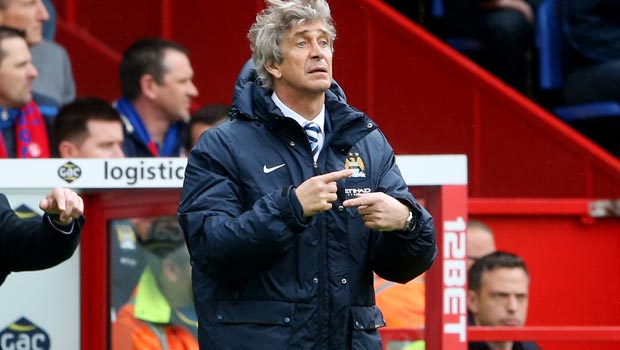 Manchester City boss Manuel Pellegrini believes his players have what it takes to handle the pressure as they try to win their second Premier League title.

Pellegrini’s men are in pole position to finish top of the pile as they have one game in hand over leaders Liverpool. The Reds also slipped up on Monday night when they squandered a 3-0 lead against Crystal Palace to draw 3-3 at Selhurst Park.

City can take full advantage when they face Aston Villa on Wednesday night at the Etihad Stadium, but Paul Lambert’s men will be on a high after beating Hull 3-1 last weekend.

Speaking ahead of their crucial clash, Pellegrini said: “We have experienced players, they’ve been in a similar situation two years ago. We have the pressure to win, but we’ve had it the whole year.

“From the beginning of the season, I always said that this team wants to win the title. Now we will try to do it.

“The only way to continue in our position is to win the three points and after that we can analyse all the other things when the race is over.

“If I try to be calm, it’s because I think it’s the best way for the players to play these two games, but I don’t want to talk about the title race now.”

Pellegrini will be without star striker Sergio Aguero for the clash against Villa after he picked up a groin injury against Everton.

Despite this they are still heavy favourites to pick up three points, and they can be backed at odds of 1.17 to win, with the draw priced at 7.60 and Villa 15.69.