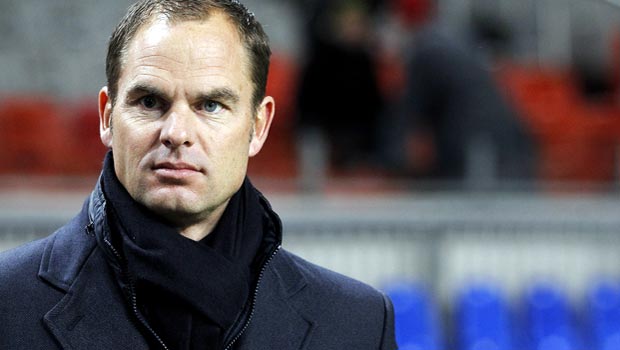 Ajax boss Frank de Boer has dropped a big hint he is set to leave the Dutch champions after confirming he wants to manage in the Premier League.

The former Barcelona defender is reportedly wanted by Tottenham Hotspur, who look certain to sack Tim Sherwood at the end of the season.

De Boer recently guided Ajax to their 33rd league title but, after winning four on the bounce, he is rumoured to want a change.

In recent weeks, Ajax claimed that Spurs had made contact about De Boer’s services, something the Premier League club then denied.

After that rumoured approach, De Boer insisted he was happy to remain in the Netherlands, but he has now hinted about a possible switch.

He told Gazzetta dello Sport: “I have never talked with Inter Milan, but I prefer the Premier League, Bundesliga and La Liga. Italian football is very much in decline.

“Juventus did not play badly but they often expect that the two forwards need to create something. It’s not my football.

“I would not go to Barcelona. It is very difficult to be a coach there. What can you teach players like Messi and Iniesta?

“Tottenham talked informally with Ajax of my contract. I think they are quite happy with Tim Sherwood, but it is normal that they take information about a possible successor, as did Liverpool in the past.

“That time, I said I wanted to stay at Ajax. I’m very happy here.

“But if it came from a club with an interesting perspective and a good team, I would consider the proposal.

“I want to understand what contribution I can give.”