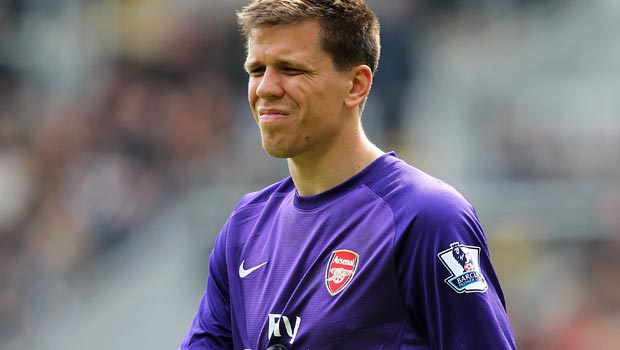 Wojciech Szczesny is adamant that he is not satisfied with securing a fourth-placed Premier League finish with Arsenal and the possibility of FA Cup glory because he feels they should be fighting for the title.

The 24-year-old Poland international has been the first-choice goalkeeper for the Gunners’ Premier League campaign as Arsene Wenger’s men shook off the attentions of Everton to claim fourth spot and a place back in Europe’s top competition next term.

The side will also have a chance to end their nine-year wait for silverware on May 17 when they face Hull City at Wembley in the FA Cup final.

However, Szczesny feels that the north Londoners should not be happy to keep settling for a top-four spot and the odd crack at silverware in domestic competitions.

Looking back at Sunday’s 1-0 win against West Brom in their final Premier League game at the Emirates this season, he said:
“It is good to sign off with a win in front of our fans, but with two games to go we had nothing to play for and I think we shouldn’t really be in that position – we should be fighting for the title, so that is disappointing.

“I never considered fourth place before the start of the season as a successful season and a good position – I play for Arsenal because I want to win the title every year.”

Despite Arsenal slipping away from title contention this term, which Wenger recently put down to the loss of key players to long-term injuries, such as Theo Walcott, Aaron Ramsey, Jack Wilshere and Mesut Ozil, Szczesny is confident that the side will last the distance next term.

He added: “It didn’t happen for us this year, but one thing we have learned is that that we are good enough to challenge next year, and hopefully add a little bit more strength as well with a couple of new players coming in.

“If we manage to keep the consistency for the whole season, then we will be up there.

“We have had a good run and the momentum is with us so we stay positive and hopefully finish with a trophy at the end of the season.”