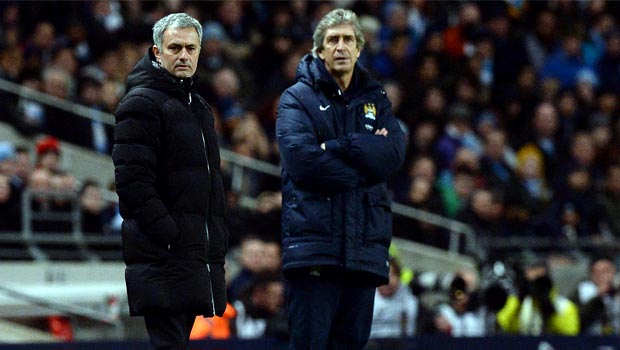 Manchester City boss Manuel Pellegrini insists he won’t be pressurised into changing his tactics, despite his team failing to either score in or win their last two matches.

The Citizens had managed to rack up over 100 goals in all competitions before their meeting with Chelsea two weeks ago but failed to find the back of the net against the Blues as they went down to a 1-0 defeat at the Etihad.

City were off target again last week when they took on Norwich, losing further ground in the Premier League title race as they were held to a goalless draw.

In the wake of those two results, Pellegrini has found his tactics being questioned, with some suggesting he abandon his 4-4-2 formation for City’s next two matches against Chelsea and Barcelona.

The Chilean’s outfit was over run in midfield by Chelsea in the league meeting a fortnight ago, while they were also defeated by Jose Mourinho’s men at Stamford Bridge earlier in the season.

Despite his previous failures against the Blues, Pellegrini insists he won’t change how he sets up his side for the FA Cup clash at the Etihad Stadium.

He said: “I am absolutely sure that in the previous game it was not a problem with tactics.

“The squad had a lot of changes and we had three or four clear chances before they scored.

City are priced at 2.59 to get the better of Chelsea on this occasion, while the visitors are 3.85 despite having already beaten their fifth round opponents twice this season.

With Tuesday’s huge Champions League clash with Barcelona looming large on the horizon, Pellegrini has indicated he will rest a number of his first-team regulars for the FA Cup encounter.

However, Samir Nasri could be given a run out after five weeks out with a knee injury in the hope of getting him up to speed in time for the visit of the Spanish champions.