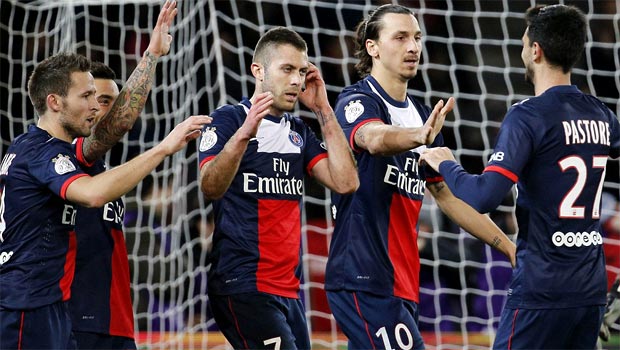 The Parisians named a strong line-up for the visit of relegation-threatened Valenciennes in the knowledge that victory would move them eight points clear of nearest rivals Monaco at the top of Ligue 1.

The capital outfit started strongly and were ahead after just 18 minutes when Ezequiel Lavezzi, who had been a doubt for the game after the murder of his uncle this week, tucked home Zlatan Ibrahimovic’s free-kick from close range.

Ibrahimovic then scored his 19th league goal of the season in the 50th minute to make the game all but safe, volleying home Yohan Cabaye’s cross.

An own goal from Gary Kagelmacher just two minutes later gave Blanc the opportunity to rest some players ahead of the trip to Germany this week for the first leg of their Champions League last-16 tie.

Blanc was pleased with how his side took care of their opponents relatively early and says all has gone to plan ahead of the game with Bayer Leverkusen.

“Although we had planned for this scenario, we still had to execute it,” said the former France head coach.

“The second and third goals helped us to rest some of our biggest players.

“Before Leverkusen our job was primarily to win this game. They could have thought of that match but they ignored it and did the job. Yes, we could have been more efficient, but to score three times without conceding is not bad.”

Blanc went on to reveal that Edinson Cavani will definitely miss Tuesday’s first leg at the BayArena as he only began running again on Friday following an injury.

Even without Cavani, PSG are priced at 2.35 to win the first leg of their Champions League tie, with Bayer 2.91 for the victory.