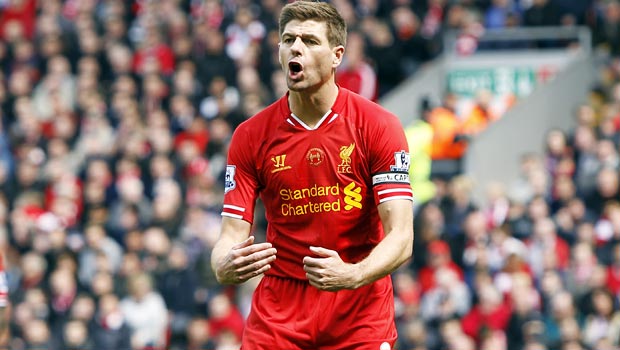 Gerrard’s slip against Chelsea and the dramatic comeback from Crystal Palace against Liverpool last Monday meant the Reds needed to win and their rivals Manchester City to lose on the final day to clinch their first league title in 24 years.

But, despite recording a 2-1 win over Newcastle at Anfield, Liverpool finished two points behind the champions after City beat West Ham 2-0.

“This experience is going to take us to the title,” Gerrard told LFC TV. “Whether it is next year or the year after, it will happen pretty soon.

“I’ve only got a couple of years left but I still believe I can get there.”

Gerrard is 33 now and although he has captained Liverpool to success in the Champions League, FA Cup and League Cup, the Premier League remains beyond his grasp.

Manchester United fans taunted the Liverpool star and 40,000 of his Anfield disciples when they flew a banner over the ground on Sunday declaring: ‘United 20 Gerrard 0′ in reference to the one medal missing from the captain’s cabinet.

However, Gerrard believes the improvement shown by Brendan Rodgers’ side to go from seventh to a close second in 12 months shows Liverpool can take the next step soon.

“I thought my days of title races had gone but, having played with this group of players this year, the dream is back,” he said.

“I never give up fighting. I’m really confident and believe the title is not too far away.

“We’ve proved this season that we’re capable of mixing it with the best, and we want to go one better next year.”