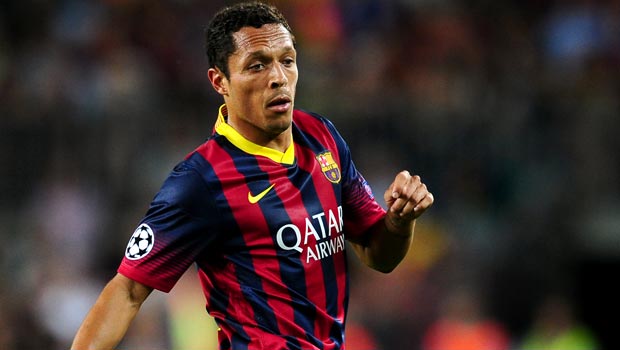 Atletico lead Barcelona by three points going into the eagerly-anticipated clash at Camp Nou but, because the Spanish title is decided on head-to-head records if teams finish level on points, Barcelona can snatch the trophy with a victory on Saturday.

Barcelona drew 0-0 with Atletico at the Vicente Calderon earlier this season, the same scoreline they managed against Elche on Sunday which sets up the finale.

“We wanted to win but the draw allows us to play the decider at home,” said Adriano.

“It will be a unique match, we have to focus solely on this game against Atletico. We can’t hold anything back.”

Atletico missed out on a chance to seal the title on Sunday when they failed to beat Malaga, drawing 1-1 at home. Barcelona looked to be out of the title race just nine days ago when they sat three points behind Diego Simeone’s side – who had a game in hand.

Adriano added: “It will be a match full of nerves and anxiety, but we have to control our emotions – we will have a very tough rival in front of us. We have to chance to win a very important title.”

Barca right-back Dani Alves echoed his team-mate’s sentiments: “Everything has happened to us this season, but we have another chance to win La Liga. Now we have to focus on Atletico.

“If we truly deserve the title, we have to prove it against Atletico, we have a chance to win La Liga. We have to give everything we have.”

Coach Gerardo Martino, who is expected to be replaced this summer, admitted that his team were tense against Elche because a defeat would have ended their chances and warned his men not to suffer another anxiety attack against Atletico.

“In the final minutes there was ambiguity in our approach because we needed to score but a goal from Elche would have seen us out of the competition. We tried until the end regardless of the results from the other matches,” the Argentine said.

“This situation has happened to us before this season, when we miss early chances our patience runs out and it turns into desperation.”