Liverpool: Reds on a title mission in East Anglia 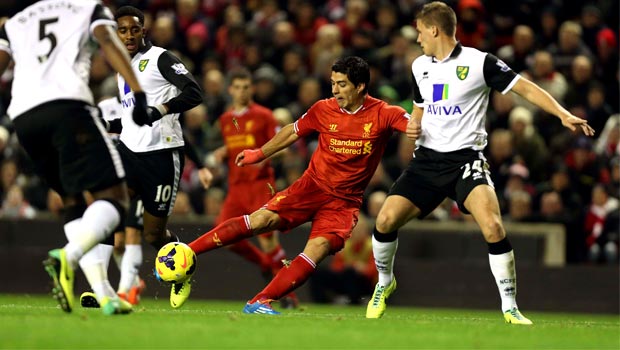 Liverpool travel to Norwich on Sunday bidding for the three points that will take them another step closer to the Premier League title.

With Manchester City, in particular, derailing themselves in the past week, the Reds have their fate solely in their own hands if they are to capture a first league title in 24 years. And if past recent visits to Carrow Road are anything to go by, Luis Suarez in particular could be in for a good day.

The Uruguayan has bagged hat-tricks on each of his last two visits, and found the net no less than four times in the 5-1 win over Norwich at Anfield in December.

Suarez is already in the process of rewriting goalscoring records in the Premier League, being just two away from the 38 achieved jointly by Alan Shearer and Cristiano Ronaldo, while with four games still left, he is just one away from becoming the first Liverpool player to score 30 goals in a Premier League season.

He doesn’t need any motivation, but you can be sure Suarez knows all about the records, and that spells bad news for struggling Norwich who have been dealt a poor fixture hand, having to also play Manchester United, Chelsea and Arsenal as they fight for Premier League survival.

Former Liverpool legend Michael Owen has nothing but praise for Suarez and his contribution in Liverpool’s outstanding season.

“Suarez has been the best player in the Premier League this season,” he said.

“But, when it comes to Suarez, I don’t think I have seen anything that good since probably Thierry Henry was playing in the Premier League. He has been absolutely outstanding.

“And it’s important to mention he has been absolutely exemplary this season. His discipline has been great.”

Daniel Sturridge is battling to overcome a hamstring injury after limping off against Manchester City, and his presence would be a big loss in the final push, but with Raheem Sterling in great form, Liverpool will not have to rely solely on Suarez to carry them over the finishing line, but if he does, the Kop will not mind one bit.

Jordan Henderson is suspended following his sending off against City, so either Lucas or Joe Allen are set to come into midfield.

The match kicks off at 12 noon UK time on Sunday-check out the very latest Premier League match prices with Dafabet.