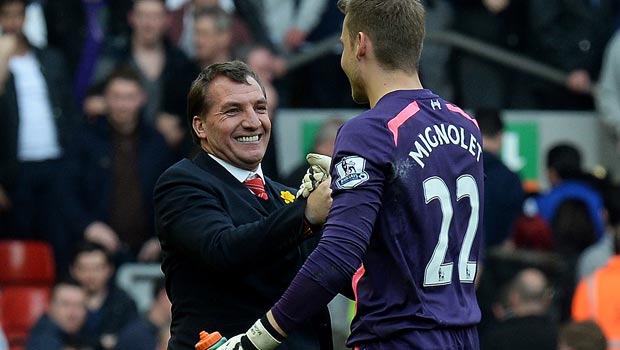 Liverpool boss Brendan Rodgers claims his side will go out against Tottenham expecting to win as they look to maintain their title challenge.

The Reds have been the surprise package in the division this season, going from a seventh-place finish last term to mounting a serious bid for the Premier League this time around.

The Merseysiders start the weekend just a point behind league leaders Chelsea in second having won their game in hand on the Blues on Wednesday night against Sunderland.

Liverpool did appear to show signs of nerves in the 2-1 win over the Black Cats and ahead of taking his team to Anfield on Sunday, Tottenham boss Tim Sherwood has questioned whether Rodgers’s men can handle the pressure of a title race.

Rodgers has hit back at his opposite number by claiming Spurs should be title contenders after spending over £100million last summer, although he did go on to admit that money doesn’t necessarily equal success.

The Northern Irish coach has found memories of this season’s previous meeting with Spurs after coming away from White Hart Lane with all three points following a 5-0 demolition of the north London club.

That was Andre Villas-Boas’ last game in charge of Tottenham, with Sherwood taking over just before Christmas.

While Rodgers believes Sherwood has done well since being given the reins at Spurs he is still confident of notching up another win at Anfield, Liverpool having won 13 of their previous 15 home matches.

“When we beat Spurs 5-0, we played fantastic attacking football, and kept a clean sheet. Tim’s done really well, brought passion back,” he said.

“We’re at Anfield this weekend. We expect to win every time, whoever we’re playing.

“We’re not always going to be four, five or six-nil up in games. Sunderland defended very well, but we dominated until they scored.

“We’ve got seven games left and 21 points to play for. The objective has always been to finish as high as possible.”

Liverpool are priced at 4.00 to win the Premier League, with Manchester City the 1.85 favourites as they have two games in hand on the Reds and Chelsea.