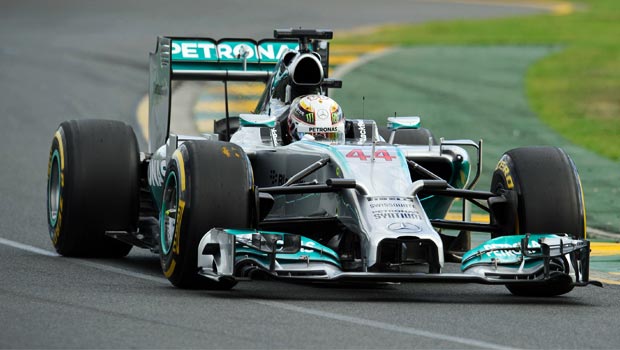 Lewis Hamilton held off the challenge of world champion Sebastian Vettel to claim his second successive pole of the season for Sunday’s Malaysian Grand Prix.

Mercedes were once again the ones to beat in Saturday’s qualifying session but a series of thundery downpours helped to level the playing field.

After a 50 minute delay to the start of qualifying due to the track being under water in parts, Hamilton laid down an early marker by clocking the fastest time in Q1.

Despite the conditions worsening, the 2008 world champion was quickest again in Q2 and seemed certain to claim pole ahead of team mate Nico Rosberg and Vettel.

However, Q3 proved to be an intriguing battle as the track got wetter and wetter, with the power of the Mercedes pitted against the superior downforce of the Red Bull.

In the end it was the power of Hamilton’s car which won out, but only just, the British driver securing first place on the grid by just 0.055 seconds from Vettel.

Rosberg was able to secure third after bumping Ferrari’s Fernando Alonso down a place in the closing stages of the session, with Red Bull’s Daniel Ricciardo fifth.

Having come through a testing qualifying session unscathed and on top, Hamilton is now looking for Mercedes to hammer home their advantage on race day as he looks to make up for lost time having retired from the Australian Grand Prix.

“For myself and for the team, the priority is to bag as many points as possible. We’ve got great a great opportunity, a great car and a team that is performing fantastically right now. Fingers crossed we can see ourselves through to the finish line,” said Hamilton.

After his disastrous start to the season, which saw him retire five laps into the Australian Grand Prix, Vettel is quietly confident of giving Mercedes a bloody nose on Sunday.

“It was very close, too close. I should be on the good side for tomorrow but it depends on how good the start is. I’m happy with the result,” said the German.