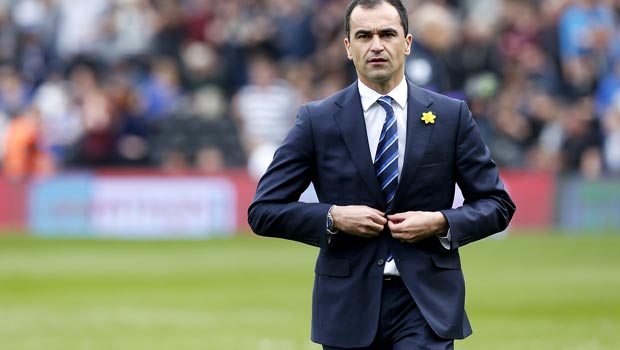 Roberto Martinez claims Everton should not concern themselves with their rivals’ fortunes in the race for a top four finish.

Four successive victories in the Premier League have put the Toffees right back in the hunt for a Champions League spot, and their chances of finishing fourth could be given a boost this weekend.

Arsenal currently occupy fourth, six points ahead of Everton, who have a game in hand on the Gunners.

Arsene Wenger’s men have struggled of late though and face a tricky match against title-chasing Manchester City on Saturday.

Another defeat for the north London club, coupled with a victory for Everton in their clash with bottom side Fulham, will leave Martinez’s men within striking distance of Arsenal ahead of their trip to Goodison Park on April 6.

The Merseysiders will also be hoping local rivals Liverpool can do them a favour this Sunday by beating Tottenham with Spurs just a point behind Everton at the start of the weekend.

While Martinez will no doubt be keeping his fingers crossed that results go his way this weekend, he won’t be relying on those around the Toffees to falter and insists he is just focused on his own team’s plight.

“You’ll get dizzy if you start looking at what the others can do,” said the Everton boss.

“It is easier than that. You look at the points you can get and if it is big enough you can look at trying to achieve top four and finishing the season with European qualification.

“There are many twists and turns, the league this season has shown anyone can beat anyone or drop points where they are not expected to.

“It doesn’t matter what the others will do in terms of having a successful season, it will be down to how many points we can get.

“I have learned in the past when you are trying to pre-plan it never works out that way. All that matters is we try to be as good as we can be and try to get as many points as we can.”

Everton are 1.78 to make it five wins on the bounce at Fulham this Sunday, with the Whites 4.43 to pick up a vital three points in their fight against relegation.