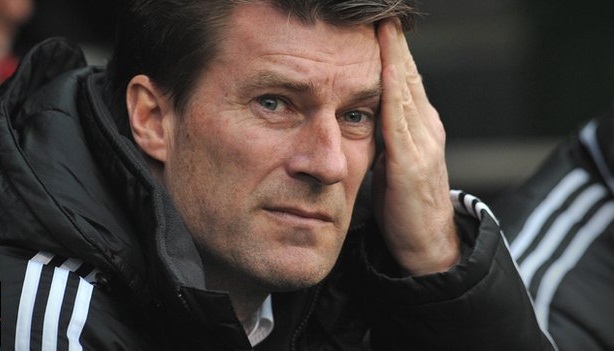 Michael Laudrup has eased Swansea fans’ fears by insisting that he is planning to stay, despite the club and his agent falling out.

Michael Laudrup has eased Swansea fans’ fears by insisting that he is planning to remain at the helm at the Liberty Stadium, despite the club and his agent falling out.

The Danish tactician enjoyed a tremendous first season in south Wales, guiding the Swans to Capital One Cup success – the club’s first major trophy – as well as a more than comfortable ninth-place finish in the Premier League.

His success has reportedly caught the attentions of a number of clubs across the continent, with Paris Saint-Germain said to be keeping a close eye on the former Barcelona and Real Madrid star, while a recent spat between his representative Bayram Tutumlu and the club over transfer policy has only added fuel to the fire.

Laudrup has confirmed he will not be changing his representative but insists that it does not alter his stance over his position at Swansea
– that he will be staying next season.

“I have repeated it so many times in the last three months. My intention is to stay,” Laudrup told the South Wales Evening Post.
“Bayram is my agent and that’s not going to change.

“The only thing I care about is to have the best players possible at Swansea who are within range of the economy of the club.

“It will not change my relationship with Bayram one centimetre.

“The only thing I am interested in is having the best players at Swansea within the budget that is possible.”

Laudrup only signed an extension to his current deal in March but, along with PSG, Roma, Fenerbahce, Malaga, Monaco and the two Spanish giants of Real Madrid and Barcelona have all been linked as possible destinations.