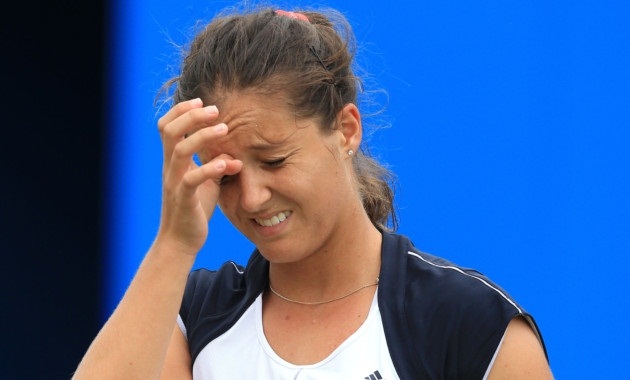 Laura Robson moved to play down expectations ahead of Wimbledon and insists it will take time for her to gel with her new coach Miles Maclagan.

It is that time of the year when British tennis fans go crazy with the year’s most famous Grand Slam event just around the corner and of course hopes of a home winner are ramped to the extreme.

Robson has begun her preparations for Wimbledon in disappointing fashion as she was dumped out of the AEGON Classic in Birmingham on Wednesday in straight sets by Daniela Hantuchova.

The Slovakian has been as high as fifth in the world in the past but currently lies down in 60th place, so the 6-3 6-4 defeat will have come as a big disappointment to the British number one, who is 23 places higher in the rankings.

Wednesday’s match was her first since partnering with Maclagan and Robson insists that it will take time for her to get going under Andy Murray’s former coach.

“It’s good so far and we’ve only had less than a week together so there’s no miracles yet, but in general my serve is looking a bit better than it was and I’m feeling pretty good on court,” Robson said.

“There’s no magic solution, it takes time and a lot of hard work on the practice court to fix anything and over the last couple of days we’ve done a lot (of work) on my serve which I think looks a bit better, so I think we have a lot to work on.”

Wimbledon is now just two weeks away and Robson will continue her preparations on grass in Eastbourne next week, but sees no reason why she cannot perform at SW19.

“I’ve got to stay positive, confident and focused on Wimbledon. I don’t see why I can’t do well there – I’ve always played pretty well in the past,” she added.