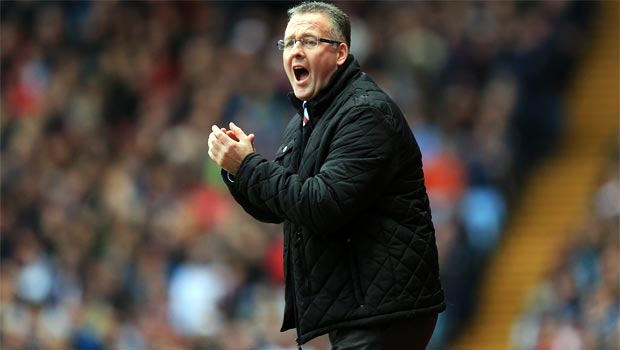 The Aston Villa fans may have seen reason to vent their frustrations of late but Paul Lambert is preferring to concentrate on the positives, following the travails of last season.

The wheels have come off to a certain degree with the Villans now having won just one of their last eight Premier League games, with just four points separating them and the relegation places.

The Midlands outfit did at least snap a four-match losing streak with the 1-1 draw against Swansea on Saturday, although the visitors’
dominance for long periods caused frustrations in the stands, particularly having lost at home in their previous match to Crystal Palace.

Although things have not gone according to plan for Lambert, he feels the doom and gloom merchants are perhaps judging the side too early and is not too downbeat on Villa’s prospects this season.

“The top five or six will always be that as there’s too much money there because there is so much emphasis on the Champions League,”
Lambert said.

“The revenue is too much and the players have x amount of millions.
We’re not in that position at the moment, this is a building block of players that will make a right good go at it. You have to keep building this club.

“That project will take however long (owner) Randy Lerner gives me.
That’s the bottom line. It’s not rocket science when you look at the number of managerial changes. Nothing is certain in football.

“But we’re three points from 10th. That’s not a bad place to be, there’s so far to go in this league, anything can happen. You look at the massive clubs down there, there’s no divine right, you have to earn it in this league.”

Villa travel to Sunderland on New Year’s Day and may well be happy to return to the road as they have picked up more points on their travels and been beaten only three times, compared to six defeats at Villa Park.

Lambert is still hopeful that Christian Benteke and Ron Vlaar could be available against the Black Cats following injury, with the latter’s return particularly welcome as Ciaran Clark is suspended.